So, good news! Broody chicken rehab in the rab­bit hutches worked! I released the two hens back into the coop last Mon­day morn­ing and they’ve been act­ing pretty nor­mal ever since. Here they are, act­ing pretty normal. 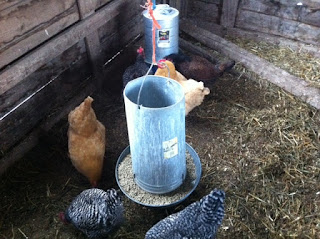 More good news! We planted our first seeds of Spring today!! My mom and I set up a lit­tle grow light A-frame in Dave’s wood shop, which is right next to the greenhouse. 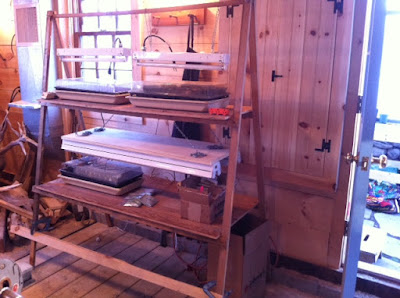 The seeds are all planted in six-cell flats or small plas­tic pots, and then placed in per­fo­rated trays for easy water­ing. They are also heated from under­neath by heat­ing trays and cov­ered by plas­tic tops so they will stay warm even though it’s still cold around here. 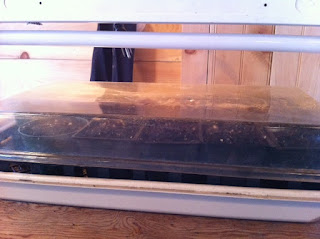 As you can see, there’s not very much going on yet, but it’s excit­ing! Today, we planted flow­ers (asters, cal­en­dula and sweet peas) as well as cilantro and pars­ley. These are the plants that require the most ger­mi­na­tion and indoor grow­ing time before being trans­planted out­side. It’s still pretty early for us to be start­ing most seedlings, espe­cially since we’re not sure when things are going to be able to go into the ground out­side yet, but next week it’s going to be time to start the leeks and by the begin­ning of April things will really be get­ting going. And thanks to a lot of rain, the crusty, dirty snow piles are start­ing to recede, so it really does feel like Spring might actu­ally be coming…
Until then, how­ever, here’s some more pic­tures of the greenhouse: 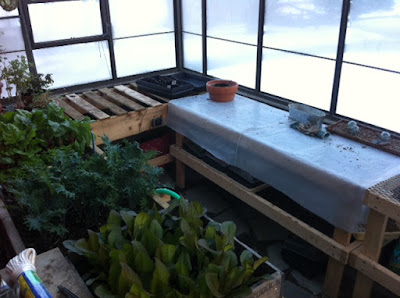 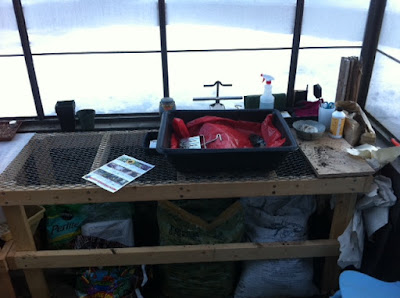 The let­tuce, swiss chard and kale is all doing great, and we’ve set up a lit­tle work­sta­tion with dirt (the mix we used today was half Happy Frog Pot­ting Soil and half peat moss) and an area for planting. 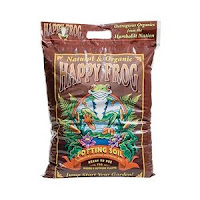