The pigs are graz­ing, root­ing, sniff­ing, and explor­ing their new pas­ture. They are so hap­py I can’t describe it in words. As soon as I released them from their tem­po­rary train­ing pen, they start­ed eager­ly explor­ing the whole area and soon were run­ning and run­ning all over the place. Its a tru­ly beau­ti­ful sight. 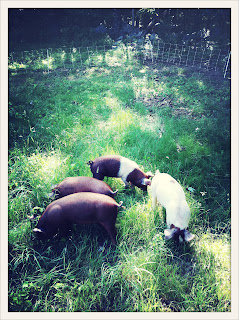 Tran­si­tion­ing the pigs to pas­ture took some plan­ning and prepa­ra­tion, but in the end it went very smooth­ly. After I got their A‑frame sit­u­at­ed in the field, I built a tem­po­rary pen for elec­tric fence train­ing. I pound­ed some U‑posts into the ground and then just built up some walls with skids and old boards. It was not very pret­ty, but it was easy to set up and it served its purpose. 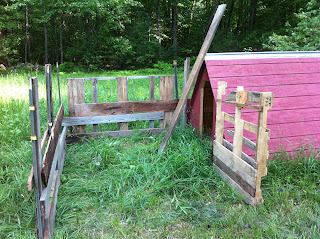 I built three sides of the pen and then set up the elec­tric net­ting as the fourth wall. Then I set up more boards on the oth­er side of the net­ting. This is the secret to train­ing pigs to the fence. Pigs don’t have the best eye­sight so the thin strands of the net­ting are eas­i­ly missed. Putting up a phys­i­cal bar­ri­er behind the net serves two pur­pos­es. It helps them see the net­ting bet­ter and it pre­vents them from barg­ing through the net­ting in pan­ic when they first get shocked, which is often their instinc­tu­al reaction. 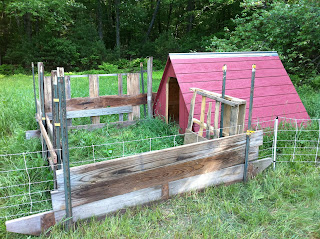 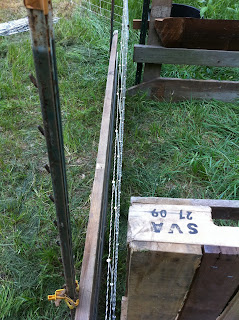 When the day final­ly arrived for the big move, I put up some tem­po­rary ply­wood sides on the bed of my pick-up truck and filled it with hay. Then I backed it right up to their pen in the barn­yard and my dad posi­tioned him­self in the truck while Gal­lagher and I caught the pig­gies one by one and hand­ed them up to him. Gal­lagher used a 4x4 piece of ply­wood to help herd the pigs into a cor­ner and then I swooped in and grabbed a hind leg. The pigs are about 50 lbs. now I would guess–I won’t be able to pick them up pret­ty soon! Pick­ing them up by the a hind leg is the best way to do it. It does­n’t hurt them and they don’t strug­gle very much as soon as you have them in the air, but they do scream. They’re not in any pain, but they scream bloody mur­der. Its so loud it real­ly does hurt your ears. And then the sec­ond you set them down on their feet again and let go, they stop.
We got them all in the truck very quick­ly and they stood calm­ly for their slow ride out to pas­ture­land. We backed the truck up to the pen and did the exact oppo­site maneu­ver. All of them got a shock from the fence with­in sec­onds of explor­ing their new space and quick­ly learned to avoid that wall as they went about rip­ping up the grass and root­ing around for bugs. 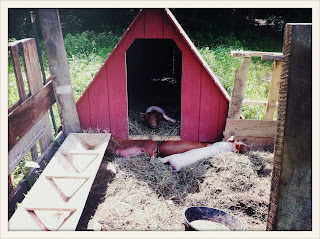 Soon they were right at home. They were in the pen for two days to make sure they had been trained, then this morn­ing I took down the walls and let them roam. As they explored the pad­dock, just like the rap­tors in Juras­sic Park, they each test­ed the fence in a few places, got a shock, let out a brief yelp, and scur­ried back in the oth­er direc­tion. What smart pigs! I’m so proud of them.
Twitter Facebook StumbleUpon Google