When I got a fever two weeks ago I fig­ured that my num­ber had finally come up and I had got­ten the flu. After a painful, sweaty and bor­ing three days in bed I felt much bet­ter and got back to work. Five days later a huge rash broke out on my neck. Unlucky again, I thought, I’ve swiped my neck with a work glove cov­ered in poi­son ivy. Easy enough to believe, con­sid­er­ing I’d spent the last month brush clear­ing and burn­ing. How­ever, this last Sun­day when I col­lapsed into bed with another fever, the rash still itch­ing and burn­ing on my neck, I started to put two and two together and real­ized that maybe this was more than just a string of bad luck. Sure enough, a visit to the emer­gency room later, it was con­firmed, I have Lyme dis­ease. Lyme dis­ease is a pretty nasty tick-borne ill­ness, and even though the antibi­otics I’m on have got­ten rid of my fever and most of my rash, they’ve left me pretty weak and tired.

Need­less to say, this news has made the last cou­ple of days pretty stress­ful for Dave, who has been forced to do all the heavy lift­ing on the farm (instead of just most of it). Luck­ily my mom’s here every­day to help. She’s been han­dling the green­house, the kitchen gar­den and the lay­ing hens while Dave’s been work­ing on get­ting the meat birds out­side and ready­ing our tem­po­rary pen for the piglets. In the last week we’ve lost a hand­ful of chicks, which has been pretty heart­break­ing. We are in charge of all of these frag­ile lit­tle lives, and although we know that it’s inevitable that we’re going to lose some, it doesn’t make it any eas­ier. A major­ity of the chicks that died appeared to have been smoth­ered by the rest of the flock. This can hap­pen when they get too hot or too cold and all clump together, but we were pretty sure that it was also because they were get­ting way too big for their brooder. We felt as if we really needed to get them out­side and into some fresh air and sun­shine. As always, the weather wasn’t mak­ing it easy for us. Dave’s new chicken bible, Joel Salatin’s book Pas­tured Poul­try Prof­its, had instructed him that it was best to put the chicks out on a dry, sunny day. If the chicks are exposed to heavy rains too quickly they can get wet and cold, or drown, and die. With fore­casts of rain for Wednes­day and today, we knew that we had to get the chicks out fast, or risk los­ing more in the brooder this week.

The frame was all set, but the trac­tor still needed chicken wire sides and cor­ru­gated roof­ing. Luck­ily, a local farmer gave us the roof­ing for free (the only cost was Dave’s time pry­ing it off the roof of an old shed with a crow­bar) and so all day Mon­day and Tues­day morn­ing, while I lay in bed recov­er­ing, Dave fin­ished up the trac­tor. Tues­day at around 10:30 AM we moved the chicks in (I watched). We decided to only move out half at first, just to see how they would do and open up some much needed room in the brooder.

If you look at the trac­tor from the angle above, the back half is cov­ered on all sides by cor­ru­gated steel roof­ing while the front half has chicken wire sides. Both the roof pan­els on the front half are remov­able. The left-hand side con­tains the waterer and the right hand side con­tains the feeder trough. It is nec­es­sary to have 3/4 of the trac­tor cov­ered by roof­ing because the chick­ens need a lot of escape from the sun, as they can eas­ily over­heat. We copied the trac­tor from Joel Salatin’s design. You can watch a great video about it here:

We moved the trac­tor for the first time this morn­ing to a new for­ag­ing spot. It went well, aside from the fact that it’s heav­ier than we would have liked. Salatin specif­i­cally rec­om­mends that you don’t use cor­ru­gated steel for the roof (it’s much heav­ier than alu­minum), but since we got it for free we couldn’t really be picky. Luck­ily, we only have to move it 12′ a day, just enough to give the chicks fresh grass. Even though there was still a lot for them to eat in the first spot, it’s nec­es­sary to move the trac­tor at least every two days as their feces will start to grow bacteria.

The rest of the chicks are going to go out tomor­row morn­ing, after the threat of rain and cold has past. Until then, they’ll have to con­tent them­selves with their new feeder. They’ve got­ten MUCH too big for the old one. 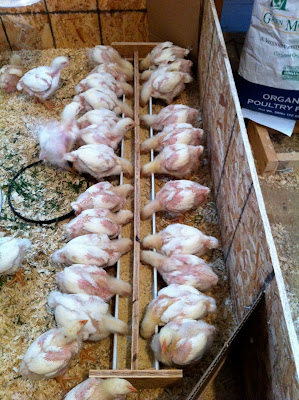 This feeder is just a piece of 4″ PVC pipe cut in half with ply­wood stands on either side. We’re get­ting bet­ter at cut­ting costs everyday.

Some Other Things We’ve Been Doing:
* Turn­ing over any sod clumps that the plow didn’t catch out in the field. It’s impor­tant that the grass is under­ground so it rots and doesn’t con­tinue to grow. We’re plan­ning on har­row­ing the field on Sun­day. We’ve also been try­ing to pick out any rocks.
* Trans­plant­ing TONS of toma­toes, pep­pers and egg­plants in the green­house, and plant­ing brus­sel sprouts and late sea­son cab­bage.
* Seed­ing the kitchen gar­den with greens so we’ll have some­thing for the first farm­ers mar­ket.
* Get­ting ready for the piglets. We decided to wait until Mon­day to go pick them up, so hope­fully I’ll feel bet­ter by then.

One Response to “Outdoor Chickens”