I recently com­pleted the pig’s new shel­ter for when they are relo­cated onto pas­ture. I knew that I wanted to build a sim­ple A-frame for them, so I looked around online and found some plans from an exten­sion ser­vice from the 60s. This is a very clas­sic design. The only dif­fer­ence is that the plans called for doors, but I decided not to add them because it just doesn’t seem nec­es­sary. My pigs won’t be around in the win­ter and if at some point I do keep pigs over win­ter, they prob­a­bly wont be out on pas­ture any­way. This is sim­ply the pig’s sum­mer home. 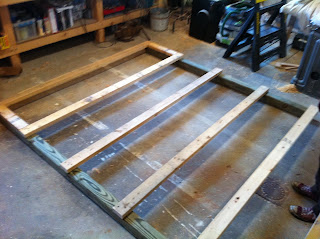 My goal was to build the house as inex­pen­sively as pos­si­ble and to use as many free/recycled mate­ri­als as I could find. At first I thought it was going to be dif­fi­cult to get what I needed for free since its all dimen­sional lum­ber and sheet goods, but it worked out pretty well. After a some­what awk­ward con­ver­sa­tion with the lum­ber­yard man­ager at Lit­tle­ton Lum­ber, they took me around back and fork­lifted down a huge stack of 2x4s and 2x6s for me. They were all recy­cled and had lots of nail holes and some sta­ples in them. And they were pretty twisted and checked, but there were a lot of long lengths, a bunch of 16′ and 12’ers. So I said thank you very much and took the whole stack. 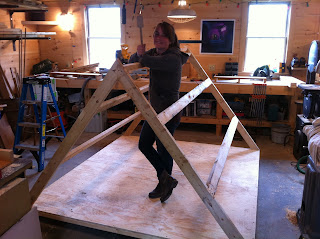 I had 5 sheets of Tex­ture 1–11 ply­wood which were left over from some project. I found them in the garage and I have no idea how they got there. Tex­ture 1–11 is ply­wood that some­what resem­bles barn boards. Its kind of hokey stuff, but it was free and for this pur­pose it actu­ally was per­fect. It looks nicer than nor­mal exte­rior ply­wood at least. 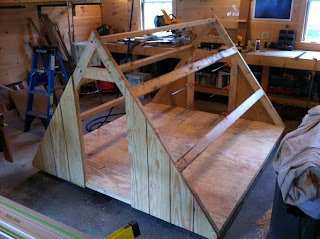 I was really happy with how effi­ciently I was able to use my mate­ri­als. I used all 5 sheets of the tex­ture 1–11, with very lit­tle scrap left over. The tri­an­gu­larly shaped sec­tions in the pic above were all cut out from one 8′ long strip. The only mate­ri­als that I ended up buy­ing were:
(2) pres­sure treated 4x4s (for skids)
(2) 4x8 sheets 3/4″ exte­rior grade ply­wood (for the floor)
(1) gal­va­nized steel ridge roll
screws, glue, and paint
All together, I don’t think I spent more than $150. 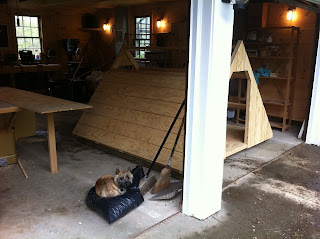 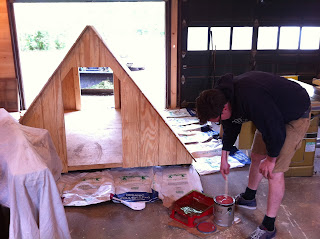 All the fram­ing I did with dry­wall screws and then I attached the ply­wood to the frame with glue and nails (using my new fin­ish nailer). I found this glue that Tite­bond makes called Interior/Exterior Wood Con­struc­tion Adhe­sive which I really liked. You apply it with a caulk gun so its great for these projects when you need to get a lot of glue on quickly. 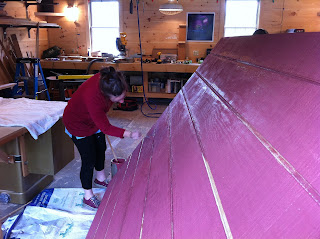 I took an old can of paint from when the barn was re-painted and got it cloned so the pig house matches all the outbuildings. 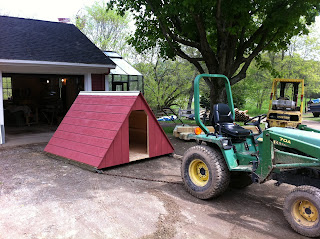 I drilled through the skids and installed a loop of chain with 1/2″ hex bolts so that the house can quickly be hooked up to the trac­tor. The house will be mov­ing every month or so with the pigs as they are rotated through the pasture. 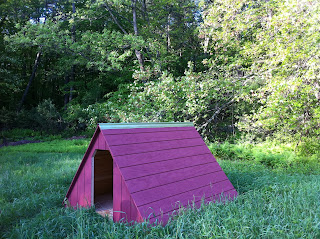 And here it is, all the way out at the end of the field! I can’t wait to get the pigs out there. I will be set­ting up the fenc­ing tomor­row, so hope­fully I’ll be mov­ing the pigs in a few days.
Twitter Facebook StumbleUpon Google