Dave and I finally got around to plant­ing some­thing in the far field today. Even though we wake up at the crack of dawn, it never seems like the days are long enough.

We wanted to try grow­ing a lit­tle bit of corn this year, just to see how it goes. In my per­ma­cul­ture (per­ma­cul­ture: a sys­tem of cul­ti­va­tion intended to main­tain per­ma­nent agri­cul­ture or hor­ti­cul­ture by rely­ing on renew­able resources and a self-sustaining ecosys­tem) book I’ve been read­ing about cre­at­ing poly cul­tures, or in other words, com­pan­ion plant­ing. The idea is that instead of main­tain­ing clas­si­cally straight and monot­o­nous rows of one kind of plant, you mix veg­eta­bles together that are mutu­ally ben­e­fi­cial. One of the most famous guilds (plant com­bi­na­tions) is the Native Amer­i­can “three sis­ters”: corn, beans and squash. The corn cre­ates a trel­lis for the beans, the beans fix nitro­gen in the soil and improve it, and the squash cov­ers the ground and inhibits weeds. Together, these three plants cre­ate a bet­ter prod­uct, using less space and requir­ing less effort. 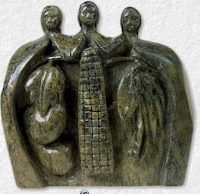 ?nce upon a time very long ago, there were three sis­ters who lived together in a field. These sis­ters were quite dif­fer­ent from one another in their size and also in their way of dress­ing. One of the three was a lit­tle sis­ter, so young that she could only crawl at first, and she was dressed in green. The sec­ond of the three wore a frock of bright yel­low, and she had a way of run­ning off by her­self when the sun shone and the soft wind blew in her face. The third was the eldest sis­ter, stand­ing always very straight and tall above the other sis­ters and try­ing to guard them. She wore a pale green shawl, and she had long, yel­low hair that tossed about her head in the breezes.
There was only one way in which the three sis­ters were alike. They loved one another very dearly, and they were never sep­a­rated. They were sure that they would not be able to live apart.
After awhile a stranger came to the field of the three sis­ters, a lit­tle Indian boy. He was as straight as an arrow and as fear­less as the eagle that cir­cled the sky above his head. He knew the way of talk­ing to the birds and the small broth­ers of the earth, the shrew, the chip­munk, and the young foxes. And the three sis­ters, the one who was just able to crawl, the one in the yel­low frock, and the one with the flow­ing hair, were very much inter­ested in the lit­tle Indian boy. They watched him fit his arrow in his bow, saw him carve a bowl with his stone knife, and won­dered where he went at night.
Late in the sum­mer of the first com­ing of the Indian boy to their field, one of the three sis­ters dis­ap­peared. This was the youngest sis­ter in green, the sis­ter who could only creep. She was scarcely able to stand alone in the field unless she had a stick to which she clung. Her sis­ters mourned for her until the fall, but she did not return.
Once more the Indian boy came to the field of the three sis­ters. He came to gather reeds at the edge of a stream nearby to make arrow shafts. The two sis­ters who were left watched him and gazed with won­der at the prints of his moc­casins in the earth that marked his trail.
That night the sec­ond of the sis­ters left, the one who was dressed in yel­low and who always wanted to run away. She left no mark of her going, but it may have been that she set her feet in the moc­casin tracks of the lit­tle Indian boy.
Now there was but one of the sis­ters left. Tall and straight she stood in the field not once bow­ing her head with sor­row, but it seemed to her that she could not live there alone. The days grew shorter and the nights were colder. Her green shawl faded and grew thin and old. Her hair, once long and golden, was tan­gled by the wind. Day and night she sighed for her sis­ters to return to her, but they did not hear her. Her voice when she tried to call to them was low and plain­tive like the wind.
But one day when it was the sea­son of the har­vest, the lit­tle Indian boy heard the cry­ing of the third sis­ter who had been left to mourn there in the field. He felt sorry for her, and he took her in his arms and car­ried her to the lodge of his father and mother. Oh what a sur­prise awaited here there! Her two lost sis­ters were there in the lodge of the lit­tle Indian boy, safe and very glad to see her. They had been curi­ous about the Indian boy, and they had gone home with him to see how and where he lived. They had liked his warm cave so well that they had decided now that win­ter was com­ing on to stay with him. And they were doing all they could to be useful.
The lit­tle sis­ter in green, now quite grown up, was help­ing to keep the din­ner pot full. The sis­ter in yel­low sat on the shelf dry­ing her­self, for she planned to fill the din­ner pot later. The third sis­ter joined them, ready to grind meal for the Indian boy. And the three were never sep­a­rated again.
Every child of today knows these sis­ters and needs them just as much as the lit­tle Indian boy did. For the lit­tle sis­ter in green is the bean. Her sis­ter in yel­low is the squash, and the elder sis­ter with long flow­ing hair of yel­low and the green shawl is the corn.
–A Mohawk leg­endFirst, Dave and I marked off a 20 by 25 foot space in the sec­ond field, and then divided it into six 20 foot rows with stakes and string. 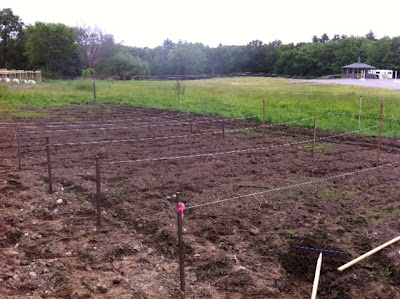 Then, we marked the string every 5 feet to sig­nal where to cen­ter our mounds. Mound­ing the soil is the tra­di­tional way to plant the three sis­ters, at least in this cli­mate and soil, because it allows for bet­ter drainage. We stag­gered the spac­ing in adja­cent rows. Before shap­ing the mounds, we dug a lit­tle hole and buried fish car­casses from my mom’s freezer (you may remem­ber from Amer­i­can His­tory class that this was another Native Amer­i­can trick). Then, a scoop of com­post on top of that, and then, finally, we raked the mounds. 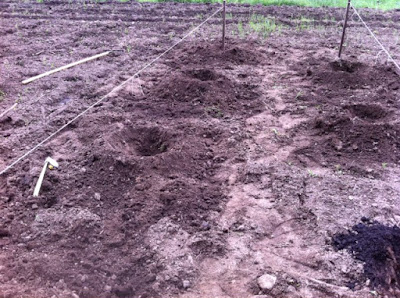 In each mound we planted four corn seeds, 6 inches apart. The got a cou­ple nice, soft sum­mer rains this after­noon so hope­fully they’re off to a good start. We’ll wait to plant the beans and squash until the corn is a lit­tle bit big­ger, so the fast grow­ing vines don’t over­whelm the lit­tle seedling.
Twitter Facebook StumbleUpon Google

One Response to “The Three Sisters”